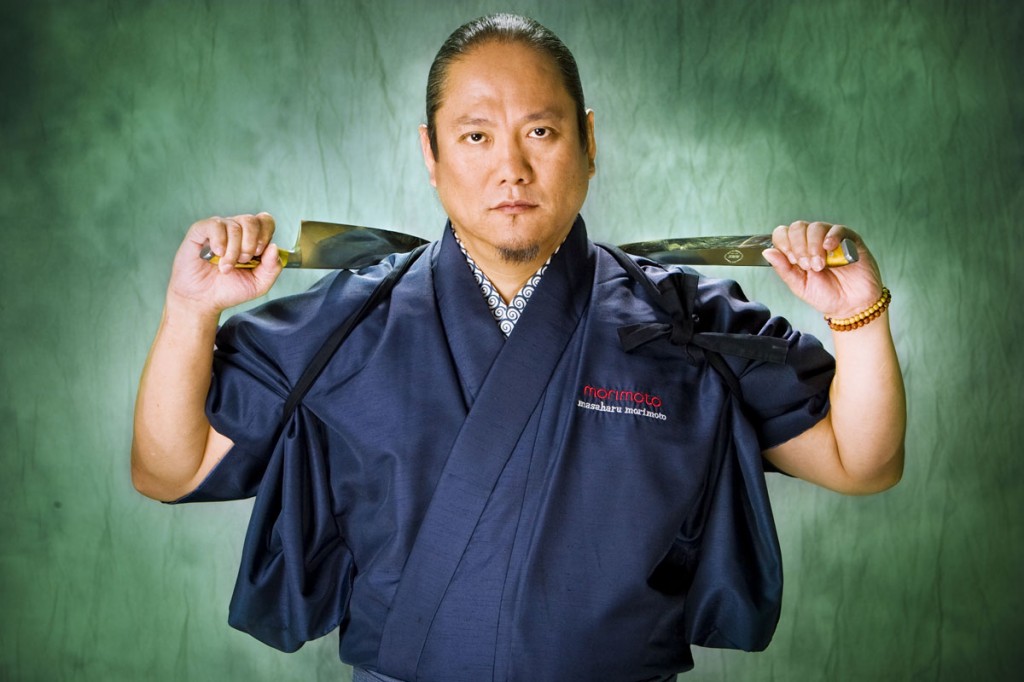 Chef Masaharu Morimoto – known to millions as the star of Iron Chef and Iron Chef America – has garnered critical and popular acclaim for his seamless integration of Western and Japanese ingredients. He has effectively created a signature cuisine that has gained worldwide appeal and positioned him as one of the foremost chefs today. Morimoto is exclusive chef at Morimoto Philadelphia, Morimoto New York, Wasabi by Morimoto (located in Mumbai and New Delhi), and Morimoto Sushi Bar (Boca Raton, Florida). In July 2010, chef Morimoto opened up his first West Coast restaurant, Morimoto Napa, in downtown Napa’s new Riverfront development, followed by the fall 2010 debut of Morimoto Waikiki in Waikiki EDITION, the luxury lifestyle hotel developed by Ian Schrager and Marriott Hotels.

Before earning chef stardom, Morimoto was to be drafted as a baseball catcher in Japan’s major leagues when a shoulder injury ended his career. Soon thereafter, he began studying sushi and kaiseki, honing his craft for seven years at an acclaimed restaurant in his native Hiroshima, Japan. At age 24, he opened his own restaurant nearby, and after a successful five-year tenure, the young chef sold it and traveled to the U.S. to further expand his repertoire. In 1993, Morimoto was tapped to head the sushi bar and Japanese kitchen at the Sony Club before being recruited by Chef Nobu Matsuhisa to open Nobu restaurant as executive chef in 1994.

Morimoto opened his eponymous Morimoto restaurant in Philadelphia in 2001, and in 2004, Wasabi by Morimoto opened at the Taj Mahal Hotel in Mumbai. In 2005, Morimoto-XEX opened in Tokyo’s Roppongi district and, in 2007, it received one star in the first edition of the Tokyo Michelin Guide. In January 2006, Morimoto brought his eponymous restaurant to New York City, earning him a James Beard Foundation Award for “Outstanding Restaurant Design” and other accolade such as “2006 Hot List” restaurant by Conde Nast Traveler; “New York’s Top 50″ restaurants by Travel + Leisure; “Top Newcomer” by Zagat Survey; and one of New York Magazine’s “Best New Restaurants”.

Since 1998, Morimoto has competed on the Japanese television show Iron Chef and also appears on the Food Network’s Iron Chef America. In 2007, his first cookbook, Morimoto: The New Art of Japanese Cooking, was published and won the IACP award in the “Chef’s and Restaurants” category and “First Book: The Julia Child Award.” It was also nominated for the James Beard Foundation Award.